We have finally made it to Friday, and are on our way to an amazing weekend! Today I wanted to review a book that I read a while back that I could relate to at that time in my life. The Fake Boyfriend Experiment by Stephanie Rowe, is to me a YA romantic comedy, that left my sides hurting from so much laughter.

“Rafe Turner has a tattoo running from his wrist to his shoulder. His hair is a little too long. He doesn’t need to rebel, because owning his life is already in his blood. He’s way out of her league, for sure, but when Lily Gardner accidentally face plants through the window of his band’s practice room, a connection is formed between Rafe and Lily that can’t be shaken. When Rafe invites her to jam with his band, Lily knows the mega-talented drummer is exactly what she needs to fix her life. The fact that Rafe already has a girlfriend? No problem. It’ll be enough if people simply think she’s dating him…won’t it? Lily is about to discover that finding her passion is a whole lot more complicated than a fake boyfriend…or two.”

What would you do to get the attention of a sexy man that is out of our league? You create a fake boyfriend of course or at least in Lily’s case she does. When Lily sees Rafe she has an instant crush on him, because honestly who doesn’t love a good bad boy? Lily decides to let her friends think she is dating him, while she creates another boyfriend for Rafe to believe she is dating someone. Lily thinks she has everything worked out, but when the truth comes out will Lily lose everything she has or will she gain exactly what she wants?

Lily is every girl, who has created a fake boyfriend or has thought about creating a fake boyfriend, once in their life. Just because someone creates a fake boyfriend, doesn’t mean they are doing it with mean intentions behind it, because sometimes it could be used to make someone seem more popular or it could protect you from unwanted attention. When I read this book, I connected with Lily on so many different levels. She is clumsy, silly, and everything she gets into will have you laughing out loud. The way Stephanie writes these characters will have you becoming best friends with them, and even maybe developing crushes on them as well. You get to see that Rafe is actually a man of different layers, and that Lily’s deception works for a long period of time until the truth comes into light. You will laugh, cry, scream, and want to slap some characters in the process, but this is one book anyone who loves to read good feel books needs to read!

Have fun creating a fake boyfriend my fellow readers! 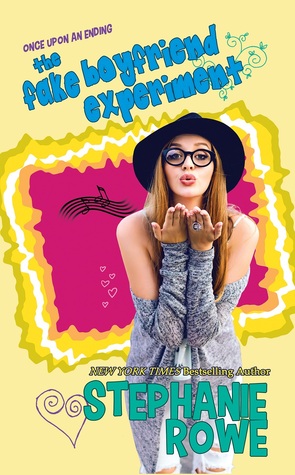