So today I will be reviewing a book that had me mesmerized and captivated until the very end. The Secret Daughter of the Tsar: A Novel of the Romanovs by the amazing Jennifer Laam. This book was the best book I have read in 2019 so far, plus I have always been obsessed with the story of the Romanovs, which lead me to getting this book in the first place.

In her riveting debut novel, The Secret Daughter of the Tsar, Jennifer Laam seamlessly braids together the stories of three women: Veronica, Lena, and Charlotte. Veronica is an aspiring historian living in present-day Los Angeles when she meets a mysterious man who may be heir to the Russian throne. As she sets about investigating the legitimacy of his claim through a winding path of romance and deception, the ghosts of her own past begin to haunt her. Lena, a servant in the imperial Russian court of 1902, is approached by the desperate Empress Alexandra. After conceiving four daughters, the Empress is determined to sire a son and believes Lena can help her. Once elevated to the Romanov’s treacherous inner circle, Lena finds herself under the watchful eye of the meddling Dowager Empress Marie. Charlotte, a former ballerina living in World War II occupied Paris, receives a surprise visit from a German officer. Determined to protect her son from the Nazis, Charlotte escapes the city, but not before learning that the officer’s interest in her stems from his longstanding obsession with the fate of the Russian monarchy. Then as Veronica’s passion intensifies, and her search for the true heir to the throne takes a dangerous turn, the reader learns just how these three vastly different women are connected. The Secret Daughter of the Tsar is thrilling from its first intense moments until its final, unexpected conclusion.”

I know a lot of people are hesitant about reading books that are told from multiple characters point of view, however the way Jennifer transports the reader over different timelines is so seamless that the story just keeps flowing together, and all of the empty spaces are filled in perfectly. The story starts with Lena who’s timeline is the same as the Romanovs, Charlotte is after the tragedy of the Romanovs, and Veronica’s is present time. These three women are each special and strong in their own right, and their stories play a bigger role in the novel. I’m trying not to say too much about this book, because I don’t want to give anything away, because trust me when the bomb is dropped, you won’t see it coming until the moment Jennifer wants you to. Let’s just say when I read it, I was screaming in the bathtub.

This story made me laugh, cry, and think about the possibility of this being true. The tragedy of the Romanovs was horrible, but Jennifer provides the reader with a historical fiction novel, that does not romanticize or disrespect the tragedy in any sort of form. If you love stories that make you get lost in time, with mystery, suspense, and just love history, you need to read this amazing book!

Have an amazing journey into the lives of the Romanovs my friends! 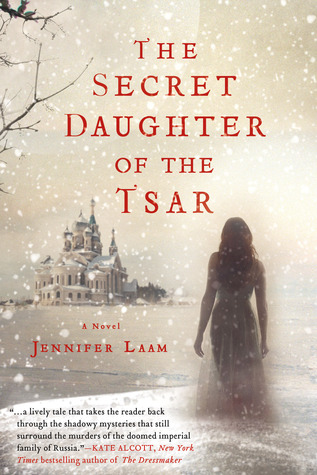