I hope everyone had a great weekend! I went and saw the Anastasia musical yesterday and absolutely loved it! Today I want to review a book that I read not knowing anything about it and loved it as well! Soulbound by Bethany Adams, is a fun, fast paced read that will leave you on the edge of your seat, and having you stay up until the wee hours to finish it. I couldn’t put it down!

Arlyn’s quest is simple: Find her father and let him know her mother is dead. After all, Arlyn had promised her mother she’d go. The problem? Her father’s people are myths and legends, and he doesn’t even live on Earth. But despite a long journey through the mysterious mists of the Veil, finding him turns out to be the easy part.

After five hundred years, Kai has given up on finding his soulbonded. So when he stumbles across Arlyn after returning from his latest mission and recognizes her as his mate, Kai starts their bond in haste. But he never could have imagined that his bonded is his best friend’s newfound daughter. Whoops.

A hidden conspiracy sparked to life

Though the sight of Kai makes Arlyn’s heart pound, she isn’t sure she can forgive him for starting their bond without her permission. But her love life is the least of her problems. Her father is an elf lord, and his sudden acknowledgment of a half-human heir reignites the same conspiracy that took him away from her mother in the first place. Now Arlyn and her family must face iron wielding assassins, bigotry, and her newly awakened magical abilities if they hope to come through in one piece.

Arlyn thought she would return to Earth after meeting her father. Now she must fight to save the family she never knew she wanted.”

I don’t want to give anything away about this book, and I think the description gives you a pretty good idea about what the book is about. So I will just tell you what I loved about the book! When you first start reading the book, I will admit at first it is slightly confusing as to what is going on, however Bethany clears that confusion up before the end of chapter 1. I really loved how fast paced the story was, and the way the author does it you don’t get confused about what is happening and you don’t lose any of the story.

Arlyn is a character that anyone who has felt like an outcast or like they didn’t belong can relate to. She is strong in her own way, and doesn’t automatically give into her love interest Kai. She also doesn’t automatically forgive her father for abandoning her and her mother, until she learns the full story. What I also loved about this book is it is told from several points of view, and all points of view give you an aspect of the story, so that you feel like you know what’s coming next before the main characters do. You also get a better feel for all the characters this way, in my opinion.

If you love magic, romance, fantasy, elves, and characters finding out where they really belong, than you don’t want to let this amazing start to a series pass you by!

Have fun with magic my little elves! 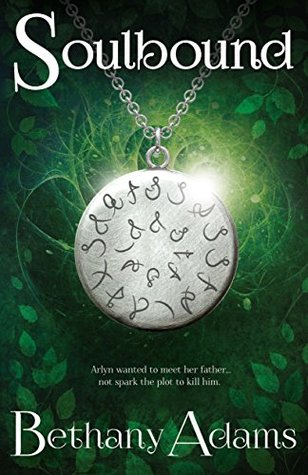