I hope everyone had a great and restful weekend! As everyone now knows, I love fairy tale retellings, and Beauty and the Beast. Today’s book has a Beauty and the Beast essence, but a different story line. No Man Can Tame by Miranda Honfleur, has elves, humans, and other paranormal creatures in it and will keep your attention until the very end.

“A human princess. A dark-elf prince. A kiss of fire and powder.

After a failed courtship in an ally kingdom, twenty-one-year-old Princess Alessandra returns home to a land torn apart by mutual hatred between the humans and the dark-elves. The “Beast Princess,” as Aless is known by courtiers, confidently sets her mind to ways of making peace, but her father has already decided for her: she is to marry one of the mysterious and monstrous dark-elves to forge a treaty, and go on a Royal Progress across the kingdom to flaunt their harmonious union. While she intends to preserve the peace, the Beast Princess has plans of her own.

Prince Veron has been raised knowing his life is not his own, but to be bargained away by his mother, the queen of Nozva Rozkveta, to strengthen the dark-elf queendom. When his mother tells him he is to marry a self-absorbed, vile human, he is determined to do his duty regardless of his personal feelings. After arriving at the human capital, he finds the “Beast Princess” rebellious and untamed—and not to be trusted.

Aless and Veron face opposition at every turn, with humans and dark-elves alike opposing the union violently, as well as their own feelings of dissonance toward each other. Can two people from cultures that despise one another fall in love? Can a marriage between them bond two opposing worlds together, or will it tear them apart for good?

If you like the fantasy and politics of Danielle L. Jensen’s Malediction Trilogy and the romance of Elizabeth Vaughan’s Chronicles of the Warlands, No Man Can Tame will lure you into its world and not let you go.

Buy No Man Can Tame today, and journey into a medieval world of magic and Immortals, masquerades and games, love and blood, and a tale as old as time…”

I will admit that I was skeptical at first about this book, but I am so glad that I chose to read this book. It has it all romance, adventure, and finding love in unexpected places. I laughed, I cried, and I couldn’t put it down until the very end. The story is told from Aless’s and Veron’s point of views, which gives you a better glimpse into the story. This is part of a series, but I haven’t read the other books yet. Miranda knows what she is doing and will draw the reader into a make believe world with characters that you wish were real. This is one book that you don’t want to miss!

Go find your happily ever after in unexpected places my dearies! 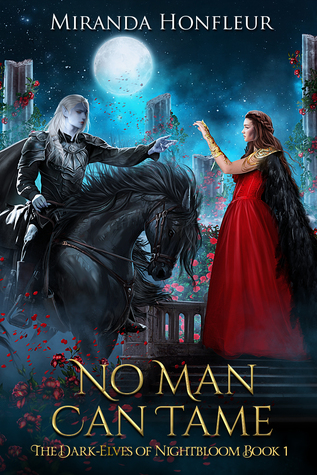