I can’t believe that tomorrow October 5th, will mark the one year anniversary of my blog. When I created it a year ago, I didn’t expect it to have this many followers or recognition. I didn’t even expect to be reached out to by authors for reviews and interviews. I have loved where my blog has gone, and can’t wait to see where it goes from here!

Today I will be reviewing a book that makes the reader travel back in time. Enemy of Mine by Red L. Jameson, takes you on an adventure of a lifetime, and it’s like nothing you have read before.

“Kidnapping mortals to different eras is such fun. Trickster muse sisters, Clio and Erato, call it a glimpse, but military historian Minerva Ferguson, Erva, is fairly certain she’s gone nuts when she wakes two hundred miles from her apartment. And two hundred years in the past to Brooklyn, 1776. In an unfamiliar manse, during the American Revolutionary War, she’s not too sure how to regain her sanity. Especially when she realizes whose mansion she’s just woken in, the one British general she studied more than anything else, Lord William Hill.

When Will hears Erva’s screams of panic, he breaks down a door to save her, even if he can’t quite remember why she’s visiting. She calms, though, the instant she sees him, as if they’ve known each other for eons. From the second he sees her dressed in a toga made from a bed sheet to later when she’s with his troops, wooing them with her musket skills, he realizes he’s smitten. But he’s a weary soldier, shrouded in grief, while she reminds him of a sun goddess. Is she too good for him? Lord, how he wants her to want him.

How could Erva not fall for a guy who accidentally quotes a Cheap Trick song? But now she has to get to the bottom of if Will is really a rake, how to stop one of the most important battles of the war, and lastly how to stop her insane crush on the general. After all, he’s going to die in less than a week.

The muses have to work fast for this glimpse. But that’s when they work best. And as explosions erupt through New York, sometimes it’s not from the artillery.”

When I first read the description, I will admit I had reservations on if it would interest me or not, but decided to give it a chance, and I am so glad that I did. Red’s writing draws you into the historical aspect of the past and mixes the past with the present in such an amazing way that you will be drawn into the story. I was transfixed from the get go, and it had me start to think, who would I love to meet from the past. This book will make you laugh and cry,  but you will enjoy every second of it!

Get a different view and travel back into the past my dear travelers! 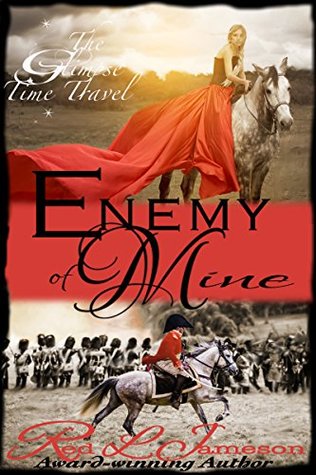