We have reached the end of another week in October and are getting that much closer to Halloween. Today I am going to be reviewing a book that is full of supernatural creatures and adventure. Damian’s Oracle by Lizzy Ford, is a laugh out loud wild adventure ride that deals with Gods and a feisty oracle.

“Inspired by Slavic mythology, Damien’s Oracle is the entree into the ongoing battle between good and evil over the fate of humanity. The White God, Damian, and his Guardians protect the world from the Black God and his monsters while rescuing Naturals – humans with extraordinary paranormal gifts – from the Black God, who would kill or convert them.

Caught in the middle is cool-headed Sofia, a Natural whose gift will tip the scales in the war. Sofia begins her transformation from human into oracle, the first in thousands of years. Damian rescues her from the Black God in time to complete a ceremony that will bind her to him for eternity. Sofia struggles with her new world and her role as an oracle and Damian’s mate while haunted by a mysterious man from Damian’s past who’s supposed to be dead. Unbeknownst to her, her link to the dead man may be all that saves Damian, his Guardians, and the fate of humanity.

While he wants nothing more than for the petite beauty to take her place at his side like the oracles of legend did his White God forefathers, Damian can’t quite rationalize having to win her over instead of command her. Further complicating his life is the sobering realization that there are spies in his organization who are helping the Black God take out his Guardians. Damian must help Sofia reach her potential fast, especially when a threat from his past returns.”

I will admit I at first was iffy about this book, but when I started reading it I was sucked into a new world and loved it! It filled with action, adventure, romance and laughter. The characters that Lizzy created will have you laughing and crying. The sarcastic dialogue will have you laughing and enjoying every minute of this wild ride. This world is something that you have never seen before, and when your done you will be screaming for more, which your in luck because their are three more books in the series, and they are already out.

Go on an adventure as one Oracle tries to navigate the world she is thrust into! 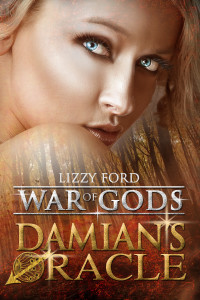