So, today I bring you a review of a paranormal romance mixed with a serial killer. Skin and Bones by Susan Harris, will leave you on the edge of your seat until the very end. I didn’t see the ending coming, and I will warn you it does end on a cliff hanger, however the second book is already out so you won’t have to stay in suspense very long.

“Being human in a world filled with supernatural creatures can give a girl a complex. Dr. Ever Chace wants nothing more than to be able to stand out in this crazy place she calls home. When she’s asked to consult on a case where teens are being brutalized, she relishes the chance to make a difference by helping to stop a monster. But when she’s teamed up to work alongside a sexy shifter, she ends up with more than she bargained for.

Derek Doyle has been a member of the Paranormal Investigations Team since the monsters first revealed themselves to the world. Considering he believes it takes a monster to catch a monster, he’s definitely in the right place. As a lone wolf not used to letting many people in, he isn’t prepared for the effect his new partner, consultant Dr. Ever Chace, has on him.

With a murderer on the loose, Ever and Derek will have to put their attraction aside while the hunt continues. Easier said than done… right?”

This book is told from multiple points of view, and bounces back and fourth between the past and the present, which to me gives you a more in depth background of the story. Derek doesn’t want to be a werewolf or embrace that wild nature that is his second half. Ever is a human leaving in a world surrounded my supernatural creatures, and is jut trying to live her life. When Derek and Ever’s worlds collide there are sparks that they both try their hardest to ignore, because they both want to catch a killer that is killing supernatural teenagers. They will go through multiple trials and turns. Can they find a killer before it’s too late or will the killer strike closer to home?

If you love vampires, werewolves, crime, murder, and a really good book that takes you on a roller coaster ride, then you will fall head over heels for this book. It was a fun and quick read that keep me on my toes until the very end. The reader gets to know some secrets before the characters do, and you will be screaming for them to wake up when the truth comes out.

Go on a journey to help Derek and Ever find the killer before it’s too late my fellow sleuths! 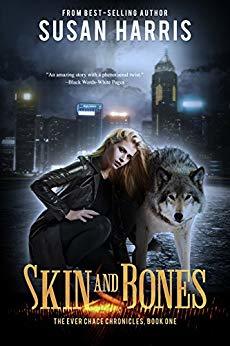