We made it to Friday, and have another weekend ahead of us! Although I have to work tomorrow, it is still going to be an amazing weekend! Today I wanted to review a biography, which is something that I haven’t done yet. The Resurrection of the Romanovs by Greg King and Penny Wilson, is an in-depth look the Romanovs fate, and the Anastasia impostor Anna Anderson, who fooled a lot of people into believing that she was Anastasia.

“The truth of the enduring mystery of Anastasia’s fate-and the life of her most convincing impostor The passage of more than ninety years and the publication of hundreds of books in dozens of languages has not extinguished an enduring interest in the mysteries surrounding the 1918 execution of the last Russian Tsar Nicholas II and his family. The Resurrection of the Romanovs draws on a wealth of new information from previously unpublished materials and unexplored sources to probe the most enduring Romanov mystery of all: the fate of the Tsar’s youngest daughter, Anastasia, whose remains were not buried with those of her family, and her identification with Anna Anderson, the woman who claimed to be the missing Grand Duchess.

Penetrates the intriguing mysteries surrounding the execution of Tsar Nicholas II and the true fate of his daughter, Anastasia

Explains how Anderson acquired her knowledge, why people believed her claim, and how it transformed Anastasia into a cultural phenomenon

Draws on unpublished materials including Schanzkowska family memoirs, legal papers, and exclusive access to private documents of the British and Hessian Royal Families

Written by the authors of The Fate of the Romanovs

Refuting long-accepted evidence in the Anderson case, The Resurrection of the Romanovs finally explodes the greatest royal mystery of the twentieth-century.”

I have always been fascinated with how people could believe Anna Anderson was the real Anastasia. What happened to the Romanov family was a senseless tragedy, and for this woman to exploit it always boggled my mind. This book helps the reader understand why people believed Anna to be Anastasia, and also shows the reader a whole new insight into the world of the Romanovs. I couldn’t put this book down because it captivates you and brings you into the mystery that rocked the world. If you want to know why people believed an impostor to be real, and more intimate details of the Romanovs than this book is for you!

Time to go discover the truth my dears! 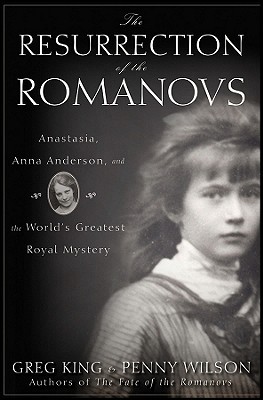